While our desktop developers are hard at work making Freya happen (we just released beta 2!), our web developers and many new contributors are collaborating over at GitHub to bring our new website to life.

With the new website, we’ve decided to revise how we promote and handle payments. We understand that this has rubbed some people the wrong way, and in the spirit of addressing concerns, we’ve decided to write this post. Keep in mind that this was a really difficult post to write. It covers sensitive territory, and it becomes difficult to choose the right words without offending anyone. That said, here’s our best explanation:

On the current (old) site, we show this: 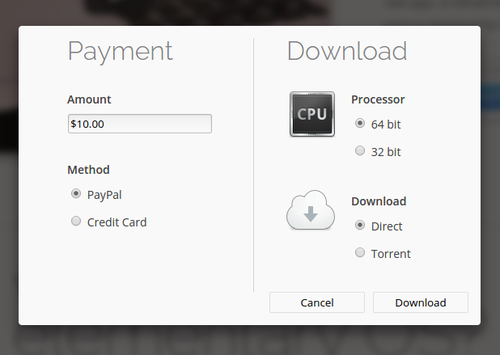 The text entry matches whatever was on the first screen, but we again let you change it to anything you’d like, including $0.

Users have downloaded Luna over 2,000,000 times. Around 99.875% of those users download without paying. Of the tiny 0.125% who do, the most common payments are the default $10, followed by $1. But again, only a tiny fraction of one percent of users even decide to pay in the first place.

Furthermore, we’ve received feedback that this flow is deceiving. It doesn’t make it clear enough that there are multiple payment options and it includes a payments step even if you’ve chosen to enter $0.

On the new site, we’re changing the approach. Rather than a text entry by default, we’ve opted to present users with some easy one-button choices: 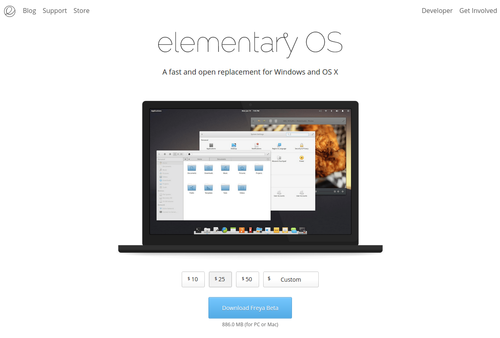 Right now we have ambitious $10, $25, and $50 buttons along with a “Custom” button that lets you type anything—including $0. These numbers may change (we’ve talked about $1, $5, and $10), but the idea remains: we feel that an entire operating system that has taken years of development and refinement is worth funding. We also still understand that not everyone thinks that, or not everyone can afford to pay right now.

If someone chooses to pay, they’re given a simple Stripe-powered dialog for their payment info, then they get the download options: 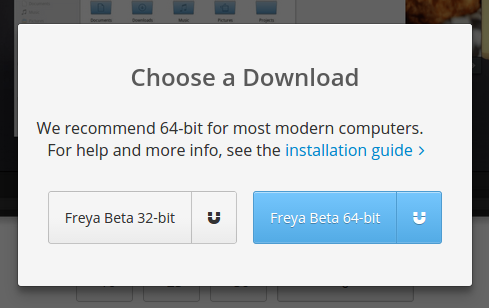 This is a much better flow for two reasons:

Of course, the new website is considered a beta and hasn’t replaced the old site yet for a reason: it’s still being worked on. The payment and download process could be tweaked before the final release of elementary OS Freya. This includes adding a lot more copy to the home page like explaining what this release contains and could include language about how Pay-What-You-Want is intended to work.

We want users to understand that paying for software is important and not paying for it is an active choice. We didn’t exclude a $0 button to deceive you; we believe our software really is worth something. And it’s not an attempt to get rich quick; currently the only people who have received money for working on elementary OS have been community members through our bounty program.*

We didn’t exclude a $0 button to deceive you; we believe our software really is worth something.

It’s about asking a fair price to offset the costs of development. It’s about securing the future of elementary OS to ensure we can keep making software that millions of people love and use every day.

elementary is under no obligation to release our compiled operating system for free download. We’ve invested money into its development, hosting our website, and supporting users. However, we understand the culture that currently surrounds open source: users tend to feel that they should receive full, compiled releases of software at zero cost. While we could rightfully disallow free downloads, we don’t want to. We believe in the pay-what-you-want model and want to see it succeed. Most importantly, we don’t want to lock out people who may not be able to afford pricey software, especially in volume.

We don’t want to lock out people who may not be able to afford pricey software, especially in volume.

However, developing software has a huge cost. Some companies offset that cost by charging hundreds of dollars for their software, making manufacturers pay them to license the software, or selling expensive hardware with the OS included. Others offset it by mining user data and charging companies to target ads to their users.

We don’t do that. elementary is only paid directly by our users. Most of the open source world is similar; Inkscape and GIMP only get money for development if users decide to give it to them. We want to keep with the ethos of putting final say in the hands of the people using the product.

We believe that if we want to see the world of open source software grow and compete at the same level as closed source software, we should encourage users to pay for its development; otherwise it’ll be underfunded or developers will have to resort to backdoor deals and advertising. And nobody wants that future. We don’t want to lose our liberty in order to maintain a lack of a price tag.

Throughout the years, I’ve noticed several recurring misuses of terms in user interfaces. Designers or developers often don’t know when to use one term…